Come and chat with other young ecosocialists.

We invite young ecosocialists to come and discuss their issues.  What concerns you, and how can the Howie Hawkins campaign support you.

All the News They Throttle , We Publish.

1. Fixing Health Care | Carolyn McClanahan  Medicare For All Providing free primary health care eliminates insurance overheads for 70% of all health care, and only costs $1000 per person. A huge step in the right direction. The bottom article is the best. 2021-05-07

2. Why Joe Biden Punched Big Pharma in the Nose Over Covid Vaccines  Covid Brilliant article by Matt Stoler tells the reasons why Joe Biden betrayed his big Pharma contributors. The first is because of the economic risk of Covid variants, the second is Russian and Chinese vaccine diplomacy. The third is progressive activism. 2021-05-09

3. United Kingdom Green Party Election Results 2021  Improving Democracy They have already secured 71 seats including 56 new seats so far, but counting continues in the majority of seats. It’s clear that we are heading towards a record-breaking election. 2021-05-08

4. David Sirota's Daily Poster Moves From Substack to Ghost  Free Speech The upgrade marks the first step in a major expansion made possible by our subscribers. 2021-05-06

5. It's the End of the World as We Know it, and I Feel Fine. What is next up for abrupt climate disruption  Climate Change This scientist has the best description of what is about to happen. He is he first I know of to talk about the Polar Vortex center migrating to Greenland. 2021-05-05

6. Howie Hawkins On biden's record  Joe Biden @HowieHawkins also does a good job pointing out what Joe Biden has done. 2021-05-05

7. “Millions of Lives Are at Stake”: Pressure Grows on Biden to Back WTO Waiver on Vaccine Technology  Covid As the WTO meets to discuss a waiver on Covid related intellectual property rights, Democracy now does a brilliant job reporting on the issues. 2021-05-05

9. Mass Violence of the Continuing Status-Quo  The Two Faces of Joe Biden We all hear about how great Joe Biden is. This article tells us what he has actually done so far. One of my favorite journalists. 2021-05-05 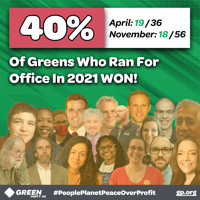 10. Chris Hedges: Don’t Be Fooled By Joe Biden  Popular Resistance <p>Don’t be fooled by Joe Biden. He knows his infrastructure and education bills have as much chance at becoming law as the $15-dollar minimum wage or the $2,000 stimulus checks he promised us as a candidate. He knows his American Jobs Plan will never create “millions of good paying jobs – jobs Americans can raise their families on” any more than NAFTA, which he supported, would, as was also promised, create millions of good paying jobs. His mantra of “buy American” is worthless. He knows the vast majority of our consumer electronics, apparel, furniture and industrial supplies are made in China by workers who earn an average of one or two dollars an hour and lack unions and basic labor rights.</p> <p>The post <a rel=&ldquo;nofollow&rdquo; href=&ldquo;https://popularresistance.org/chris-hedges-dont-be-fooled-by-joe-biden/&ldquo;>Chris Hedges: Don’t Be Fooled By Joe Biden</a> appeared first on <a rel=&ldquo;nofollow&ldquo; href=&ldquo;https://popularresistance.org&ldquo;>PopularResistance.Org</a>.</p> 2021-05-04

Please click into the news category which interests you most.

1. Climate Change -> Uncensored information about what is happening with climate change. 2020-07-20

3. Improving Democracy -> About increasing the level of democracy and transparency. 2021-03-08

8. Biden Administration -> Covering the entire administration, not just his cabinet. 2021-02-18